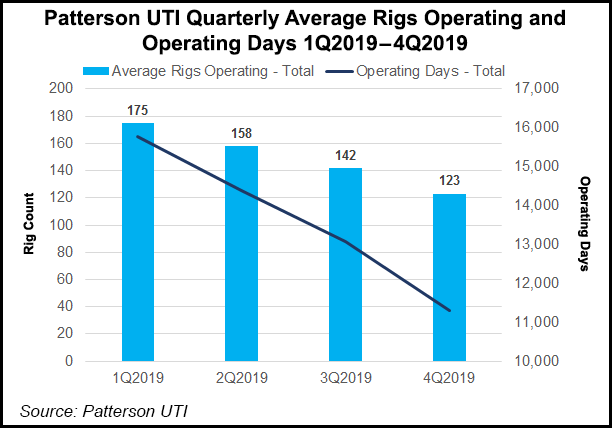 The Houston operator’s primary well construction segments, contract drilling and directional drilling, suffered in 4Q2019, but the operator still managed to eke out stronger margins in the pressure pumping business, even while it stacked, reactivated and then stacked equipment again.

The fourth quarter was unusually choppy, CEO Andy Hendricks said during a Thursday conference call. Operators dropped rigs early in the quarter, and then began calling for more equipment late in the year. The improved activity led to increased labor and maintenance costs.

Gaps in the work schedule “resulted in some rigs being stacked early in the quarter and being reactivated later in the quarter, which required us to carry extra labor while the rigs were not generating revenue or operating days.”

The fluctuation in drilling activity in 4Q2019 resulted in increased revenues and expenses associated with stacking rigs in some basins, while later in the quarter PTEN began reactivating rigs in the Permian.

The rig count likely bottomed in 4Q2019 and should “modestly increase in early 2020,” he said. Already there is an “increasing rig count” in the Permian, which “should more than offset lower activity in other markets.”

PTEN did not move rigs into the Permian during the quarter on a speculative basis, but rather because of long-term contracts, Hendricks said. Customers are using a lot of “discipline” in their Permian operations but still are willing to pay for top-of-the-line rigs.

“Demand is improving, and that’s a positive for pricing.” Through March, “we expect activity will improve from December levels and result in an average rig count similar to the fourth quarter.”

Average rig revenue/operating day was $23,980 in 4Q2019, with rig/direct operating costs averaging $15,540/day, both higher than expected. PTEN had term drilling rig contracts at the end of 2019 that provide around $605 million of future dayrate revenue.

In the pressure pumping segment, the fourth quarter began with 14 active fracture (frack) spreads. One spread was stacked in October, along with two in November as activity declined.

“We expect to average 10 active spreads for the first quarter,” Hendicks said. PTEN was slammed by the “sudden operational stoppage of a major oil company customer,” which he did not identify. “However, due to the actions we have taken and continue to take, we believe that pressure pumping results should improve later in the year.”

An overabundance of U.S. frack capacity has been a drag, Hendricks said. Pressure pumpers in the Lower 48 struggled through 2019, with hydraulic horsepower (hhp) demand falling about 10% sequentially in 4Q2019, according to estimates by IHS Markit. Demand stood at around 13.2 million hhp at the end of 2019.

“We’d all like to see more equipment leave the market,” Hendricks said. He estimated about 5 million hhp “is coming out now” by various operators. “That’s certainly a step in the right direction. With the rig count up in the first quarter and potentially in the second quarter, we could see some increases in demand. A lot of this is demand-driven and that means it’s commodity driven. We’ll see how 2020 plays out.”

One growth opportunity for PTEN is for natural gas-fueled field equipment and for dual-fueled, using gas and diesel. The Marcellus Shale operations, where production is all about dry gas output, has been the primary region for PTEN’s gas-fueled operations since 2012. “Economically it made sense” in the Marcellus, with gas infrastructure already in place, the CEO noted. Today, it’s a “two-fold” issue, particularly for operators in the Permian. A lot of gas remains “trapped” in the Permian, and customers are looking for ways to use it.

“There also are a number of customers where sustainability is important,” he said. “There is an increase in demand for dual fuel in West Texas, and we see operators investing in fields and infrastructure to bring gas to frack sites,” potentially providing enough to power drilling rigs with natural gas.

“We see an increase in that and also from sustainability,” Hendricks said. Rigs that burn gas reduce emissions at the well site, helping customers improve their sustainability scores, he said, which are linked to the growing turn by investors to companies with high scores in ESG, aka environmental, social and governance.

“We saw the trend in Europe a few years ago,” but it is becoming “more important in the U.S…We’re seeing operators adjust accordingly, and we’re well positioned for that.”

There continues to be interest in electric-powered fracking equipment too.

Hendricks disclosed that PTEN is in the “middle” of a study concerning emissions for “all of our businesses at the well site” that would deal with pressure pumping and drilling, “because operators need to understand what their options are and what they mean for them.”

For example, diesel-fueled turbines can’t be shut down in regular operations when they aren’t being used, but with dual-fueled high hhp, equipment could be displaced at full load and shut off, providing better emission results.

Management is working on technologies and applications, some of which are to transition to “more commercial modes” beginning this year. “We’re definitely moving in the right direction.”

Overall, Chairman Mark Siegel said during the conference call, PTEN “proactively responded to tough market conditions. We reduced capital spending by 46% and focused spending on maintaining the high quality of our equipment.”

“Our capex budget is primarily focused on maintenance spending to preserve the service quality for our customers and the earnings power of our assets,” Hendricks said.