The continuing slump in North America’s oil and natural gas activity in the onshore, combined with ongoing cost-cutting efforts, cut into the bottom line for National Oilwell Varco Inc. (NOV) during the fourth quarter, but the growing offshore and international business eased some of the pain. 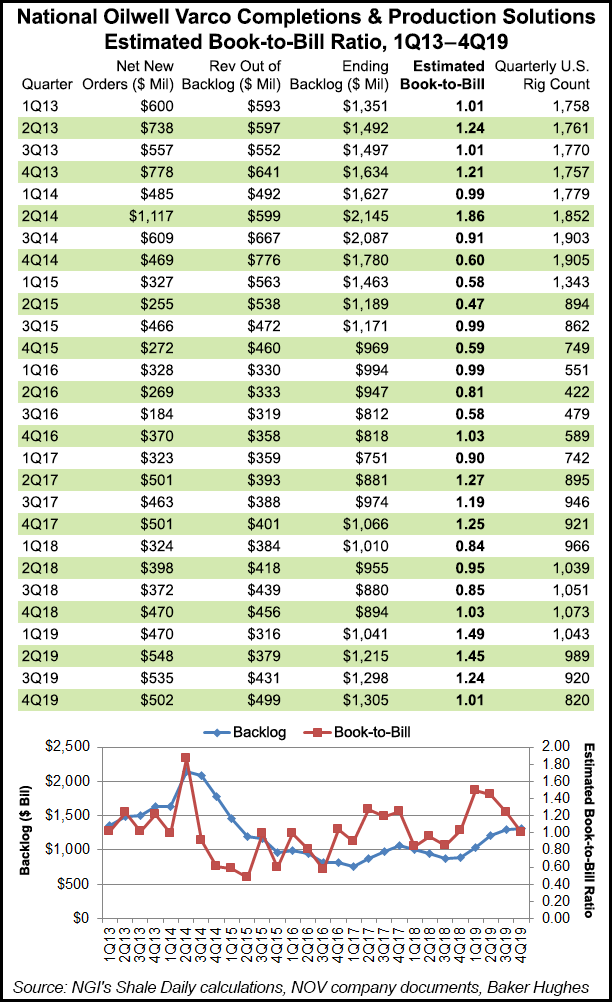 During a conference call Friday morning, CEO Clay Williams credited the organization with executing well in a “challenging market during 2019,” by implementing cost savings and efficiencies.

The CEO took a few minutes to talk about the upheaval in the industry and particularly the services companies, which have found it difficult to gain a footing with volatile prices.

“Our customers frequently rely on external capital to buy equipment that we provide them,” he noted, but by the beginning of 2019, “providers of capital to oil and gas producer and service companies were exhausted…

“Now capital is to oil and gas what oxygen is the rest of the us. Petroleum is arguably the most capital-intensive undertaking of all industrial enterprises and services is probably second.”
However, the pullback in capital spending, particularly by U.S. onshore operators, resulted in double-digit declines in the U.S. land rig count last year, while international offshore projects with favorable return characteristics continued to receive final investment decision green lights, he said.

“The industry as a whole, particularly the U.S., finally seemed to be resigning itself to the fact that a commodity price spike is not going to save the day, and the old way of doing business is not going to cut it,” Williams said. “It will unfortunately be lower for longer as the new conventional wisdom that emerged at the beginning of 2019.”

This change in the way of thinking “has important implications for our company and our industry over the next few years,” he told investors during the conference call.

“First, with respect to the elusive recovery through this year of capital austerity, some might say it is capital starvation. I’ve been struck by the number of conversations I have had with other oil patch oldtimers.

“Where we agree — that this lack of capital is as bad as any time we saw during the 1980s or 1990s — therein lie the seeds of a return to prosperity, because the new grim view that has taken hold is now driving the industry to reduce its structural overcapacity and take actions that will return this industry to health.”

The NOV team has undertaken “many difficult decisions, including pulling back from unprofitable markets and closing numerous facilities around the world, some of which had been NOV mainstays for decades.” Since 2015, 483 facilities have been shuttered to shrink internal capacity, with a “clear and tangible path” to obtain at least $230 million in annual cost savings as compared to 1Q2019.

In addition, every product line, no matter how well established, is under the microscope for an in-depth returns analysis. Services or products that do not meet an internal threshold have either developed a tangible plan for near-term improvement or have been slotted for divestiture or closure.

“We’ve tailored our strategy to fit a world where oilfield services customers have limited access to capital,” Williams said. “On new product development with capital scarce and oilfield equipment oversupply, it makes less sense for oilfield service contractors to spend millions of dollars on new units.”

their equipment in a crowded marketplace.” There will be large newbuild opportunities even in a tough market, but NOV plans to remain disciplined, he said, “and will choose not to follow our competitors and doing the stupid stuff that desperate competitors inevitably do.”

Still, growing demand in the offshore and international businesses helped boost revenue in the Completion & Production (C&P) Solutions segment to $799 million, up 1% year/year and 10% sequentially.

The third straight quarter of double-digit top-line improvement in C&P was driven by higher demand from offshore and international markets and partially offset by the “rapidly contracting demand for completion equipment in U.S. land markets,” management noted.

Operating profit in the C&P segment was $57 million, or 7.1% of sales. New orders booked during 4Q2019 totaled $502 million, representing a book-to-bill of 101% when compared to the $499 million of orders shipped from backlog. Backlog for capital equipment orders was $1.3 billion at the end of 2019.

Increases in land rig deliveries and improved progress on offshore equipment projects helped the Rig Technologies unit generate revenues of $759 million in 4Q2019, down 6% from a year ago but 17% higher sequentially. Operating loss was $23 million.

New orders booked in the Rig Technologies segment totaled $211 million in the final quarter, representing a book-to-bill of 59% when compared to orders shipped from backlog that totaled $360 million. At the end of December, the backlog for capital equipment orders was $3 billion.

Among its technology achievements in the fourth quarter, NOV said it deployed the first high pressure fracture (frack) hoses in a pilot launch with some North American completion service providers.

“By introducing flexibility into the rig-up of frack operations, reducing the number of potential leak points in the pressure line, and significantly extending operational life, NOV’s frack hoses have the potential to significantly reduce the total cost of ownership of flow connections for completion service companies,” management said.