Williston Basin independent Northern Oil and Gas, Inc. expects to trim its capital budget by over 55% to about $200 million and generate free cash flow (fcf) in excess of $100 million even at a $35 average oil price in 2020, management said Thursday. Northern has hedged about 27,600 b/d of 2020 oil production at an average price of $58/bbl, representing at least 75% of expected oil volumes for 2020 assuming the current pricing environment, CFO Chad Allen told analysts on a 4Q2019 earnings call. 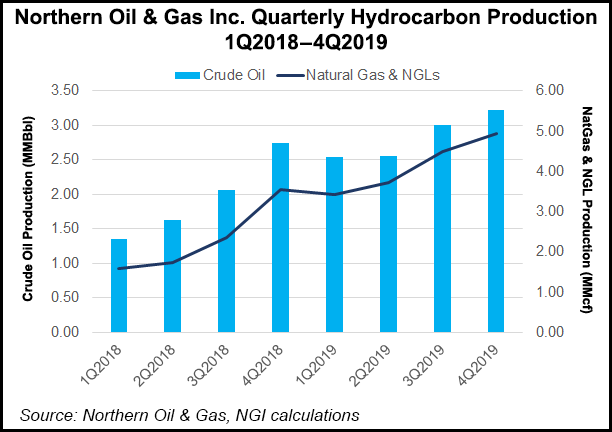 “Many companies tell you they’re hedging, but their books are littered with three-way collars that are all hopelessly underwater today,” said CEO Nicholas O’Grady. “That’s not hedging, that’s gambling for the upside. We are not going to play macro guru with your money. This has never been more important to our company than right now.”

Due to current uncertainty facing the crude markets amid an oil price war and the coronavirus pandemic, Minnetonka, MN-based Northern is postponing a decision around a dividend until the second quarter.

“In this environment, we do not believe we are helping our investors with a return of capital until such time as we know the macro outlook is stable,” O’Grady said. “It should be obvious that we plan for low oil prices, but we’re now preparing for an extended period of below threshold prices.”

He added, “In the interim, that money is much better suited to reduce our borrowings and continue to pad the balance sheet.”

Northern plans to issue formal updated guidance no later than its 1Q2020 earnings call, O’Grady said, citing that, “Many of our operators are changing their plans in real time.”

Northern is a non-operator, meaning it only holds non-operated working interests in all of the acreage in its portfolio.

“Certain private operators with strong balance sheets have already and likely will significantly curtail or shut in some of their existing production,” O’Grady said, adding that the firm is “fully supportive” of these measures in order to keep oil in the ground until the market recovers.

“We are not here to drill holes in the ground for the sake of it,” the CEO said. “Our balance sheet and risk management program are built to endure this period of time.”

He added that Northern expects “to generate significant free cash flow in the environment as it stands currently.”

Allen cited “frustrating” basin-wide production curtailments and poor realized natural gas prices as negatively impacting results, “however the endgame remains the same with significant processing capacity coming online and improvements to NGL takeaway that should lead to improved pricing in the long run.”