Appalachian pure-play Montage Resources Corp. on Friday touted 2019 as a year of transformation, as CEO John Reinhart called it a “significant inflection point” for the company’s operations following a merger between Blue Ridge Mountain Resources and Eclipse Resources that created the company. 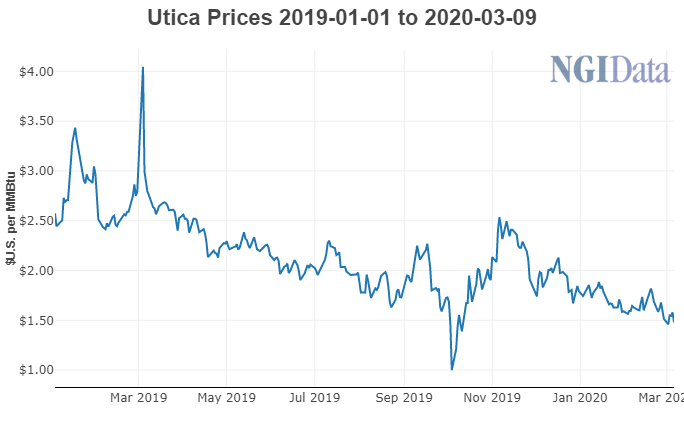 It was an unusually fond reflection on a year that saw commodity prices tumble to a point that dented the results of many of the company’s peers and saw operators scale-back across the basin and elsewhere in the Lower 48.

But production, net income and efficiencies all increased last year for the independent.

The merger was completed early last year. Shortly afterward, Montage refocused its development program around its liquids-rich acreage in Ohio, where it targeted stacked pay in the Marcellus and Utica shales, optimized lateral lengths and reconsidered initial well counts on its pads.

Well costs came in at $846 per lateral foot in the second half of 2019, down 13% from 2018. Its renewed focus also resulted in liquids accounting for 40% of fourth quarter revenue.

Montage intends to keep the focus on its liquids-rich acreage in Ohio’s Marcellus this year, when 20% of production is expected to consist of oil and natural gas liquids. The company is also aiming to stay lean in 2020, having already announced a nearly 50% cut in year/year capital spending with a budget of about $200 million.

“Given our ample liquidity, low leverage and no debt maturities for more than three years, we believe we are uniquely positioned to navigate the current commodity price landscape,” said CFO Michael Hodges. He also noted that the company’s borrowing base was increased by $275 million and its credit ratings have been reaffirmed at a time when other gassier operators in Appalachia have been downgraded.

Despite its plans to significantly curb spending, Montage is guiding for a production increase, with volumes forecast at 570-590 MMcfe/d in 2020.