Appalachian pure-play Antero Resources Corp. plans to slash spending this year through a mix of cost reduction initiatives, including workforce cuts, as it navigates the latest commodities downturn and prepares to pay off debt that’s coming due over the next two years. 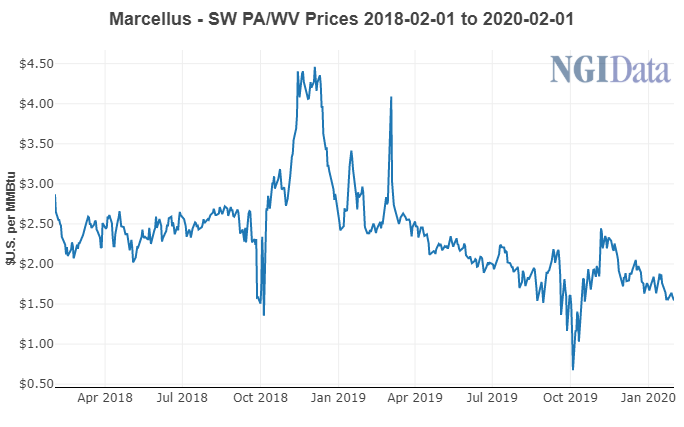 More than $2 billion of debt is scheduled to mature by 2022. The company announced a plan last year to divest up to $1 billion worth of assets in 2020 and is targeting $520 million in overall savings during the same time.

A 17% year/year reduction in well costs, or $1.9 million per well, combined with water, marketing and midstream savings, and a 10% workforce reduction in the first half of this year are expected to drive down expenses.

Antero is chasing the savings at a time when gas prices are at their lowest point in years. The company recorded about $1.8 billion in impairments last year, including a $47 million writedown on the value of its oil and gas properties and a $468 million charge related to its interest in Antero Midstream Corp. during the fourth quarter. Other gas heavy operators in the Northeast have announced similar impairments this earnings season and highlighted plans to cut spending and curb activity.

Management expects the company to be cash flow neutral under the program. This year’s natural gas production is 94% hedged at $2.87/MMBtu, while all oil and oil-equivalent production is hedged at $55.63/bbl.

Full year production is expected to average 3.5 Bcfe/d, or 9% higher than it was in 2019 — a bit more aggressive than some other Appalachian operators as Antero still needs to grow into unutilized firm transportation (FT) to further help reduce its costs.

CEO Paul Rady said the company has whittled away at those expenses, unloading some FT commitments to third parties or buying distressed gas from others at various receipt points, moving it elsewhere and collecting the spread to help offset the costs of unused capacity.

The company produced nearly 3.2 Bcfe/d in the fourth quarter, roughly flat with the year-ago period due to the timing of well completions. Volumes averaged 3.2 Bcfe/d in 2019 and were up 19% compared to the prior year.

Liquids accounted for 30% of fourth quarter production volumes. Antero has focused almost exclusively on its wetter assets in West Virginia in recent years as natural gas prices have remained stubbornly low. Liquids revenue accounted for 41% of total product revenue before hedges during the fourth quarter.

Antero also shipped 41% of its liquids production for export on the Mariner East 2 pipeline system, which came online early last year and has been ramping-up since. As a result, the company realized a 21-cent/gallon premium to Mont Belvieu pricing on those volumes. The company’s remaining liquids were sold in-basin at a 9-cent discount to Mont Belvieu.

The export market was healthy as the year came to a close, Rady said, but he noted that the Coronavirus outbreak in China has dented demand for natural gas liquids, as it has for oil and natural gas.

“We’ve definitely slowed down the last few weeks in terms of price expectations,” he said of the outbreak’s impact on the company’s exports. “We’re still moving our volumes, but the international markets are more subdued. Absent that, we’re quite optimistic about the opportunities to keep moving barrels to markets in the far east and Northwest Europe. There’s good demand and good growth.”