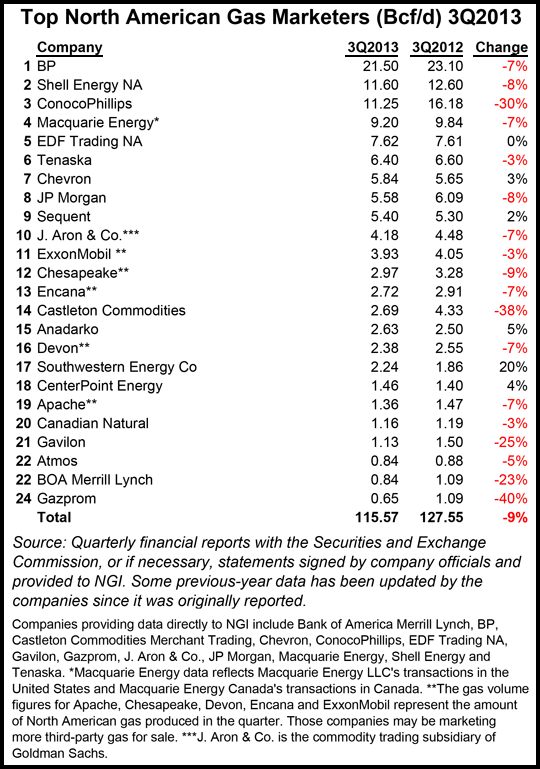 Twenty-four leading gas marketers reported combined sales transactions of 115.57 Bcf/d for 3Q2013, with seven of the survey’s top 10 marketers and 19 companies overall reporting lower numbers than in the previous year’s quarter, when the 24 marketers did 127.55 Bcf/d.

For the second consecutive quarter, the largest decline came at ConocoPhillips, which reported 11.25 Bcf/d, down 4.93 Bcf/d (30%) compared with 16.18 Bcf/d in 3Q2012. That was enough of a decline to drop the company to third place in the survey, the first time ConocoPhillips hasn’t been in the second place slot in nearly three years (see Daily GPI, March 21, 2011). The decline is primarily due to the implementation of business model restructuring in North America following the spin-off of ConocoPhillips’ downstream operations last year (see Daily GPI, April 17, 2012), and the company’s view of current market conditions.

Perennial survey No. 1 BP reported 21.50 Bcf/d in 3Q2013, a 7% decline compared with 23.10 Bcf/d in 3Q2012. Despite that decline, the energy giant is seeing better days, with a recent appeals court ruling sparing it from paying hundreds of millions in compensation payments related to the 2010 Macondo well blowout in the Gulf of Mexico (GOM) (see Daily GPI, Dec. 3), a record high number of rigs operating in the deepwater GOM (see Daily GPI, Nov. 19) and 3Q2013 earnings numbers exceeding Wall Street forecasts (see Daily GPI, Oct. 29). BP has pledged to sell $10 billion in assets by the end of 2015.

Production out of North American shale plays continues to hold down prices, according to Jan Stuart, the head of energy commodities research at Credit Suisse, but don’t expect drillers to stop extracting natural gas any time soon.

“There is an incentive for people to keep on drilling. We see natural gas in those parts of the upstream where they can actually make money doing that, and even at $4.00 that seems to be the case in some of the more prolific shale basins, such as the Marcellus, the Utica, the Eagle Ford,” Stuart told NGI. “Part of what allows people to make significant returns are the associated liquids that come up in large parts of those basins.

“I don’t see light at the end of the tunnel, so to speak. We have as a long-range gas price of $4.50/Mcf, and we think that if anything that might be on the high side. There’s simply that big a resource now economically — developable, recoverable — in the United States.”

But marketing all of that gas has become less attractive to many companies. Nearly a decade after entering the U.S. natural gas trading market, Deutsche Bank recently said it is significantly scaling back its commodities business and will exit the dedicated trading desks for energy, agriculture, base metals and dry bulk (see Daily GPI, Dec. 5). That announcement followed GDF Suez Energy North America announcing it would shut down its Houston-based speculative natural gas and power trading operations (see Daily GPI, Nov. 25). In June, Oneok closed its natural gas marketing business in a nod to the reality of flattened basis spreads and the more challenging gas trading environment (see Daily GPI, June 13).

JPMorgan and Hess Corp. have also recently announced their exits from gas marketing for various reasons (see Daily GPI, July 31;July 29). Recently, there have been unconfirmed reports that Castleton Commodities and KKR Co. may be among the groups pursuing JPMorgan’s commodities business.

And drilling for dry gas “is a real question at this point,” according to RBN Energy’s Rick Smead, who told NGI he doesn’t expect natural gas inventory levels or prices to increase significantly for at least another year.

“What we’ve seen, of course, is a more than 50% drop in the gas-directed rig count, with all of those rigs moving over to oil. And we do see still a lot of development in the wetter plays, where the NGLs are sustaining the price — except that they’re also getting kind of oversupplied…it is an extremely soft market for pure natural gas at this point,” Smead said. Demand will ramp up in the power generation sector when Environmental Protection Agency-driven coal retirements begin in 2015, and liquefied natural gas exports could start to play a role in 2018, he said.

“So it’s basically another year of rocky life for gas producers,” Smead said.

However, declines were widespread and, in some cases, significant. Chesapeake Energy Corp. reported a 9% decline; Encana Corp. a 7% decline; Castleton Commodities a 38% decline; Gavilon a 25% decline; and Gazprom a 40% decline.

The marketers survey ranks sales transactions only. Total combined natural gas purchase and sales volumes were 123,868 TBtu (Bcf) in 2012, a 0.7% decline compared with 124,752 TBtu in 2011, according to a recent analysis by NGI of 2012 Form 552 buyer and seller filings with the Federal Energy Regulatory Commission (see Daily GPI, June 4). Purchase and sales volumes cannot be compared with production because a single package of gas may be sold several times between the wellhead and the market.