Many U.S. shale plays will work with oil prices in the $45-50 range, but the majority need $55-60, and the market will eventually get there, said Devon Energy Corp. CEO David Hager. The outlook is not as bright for natural gas prices, though, he said at IHS CERAWeek in Houston last week. 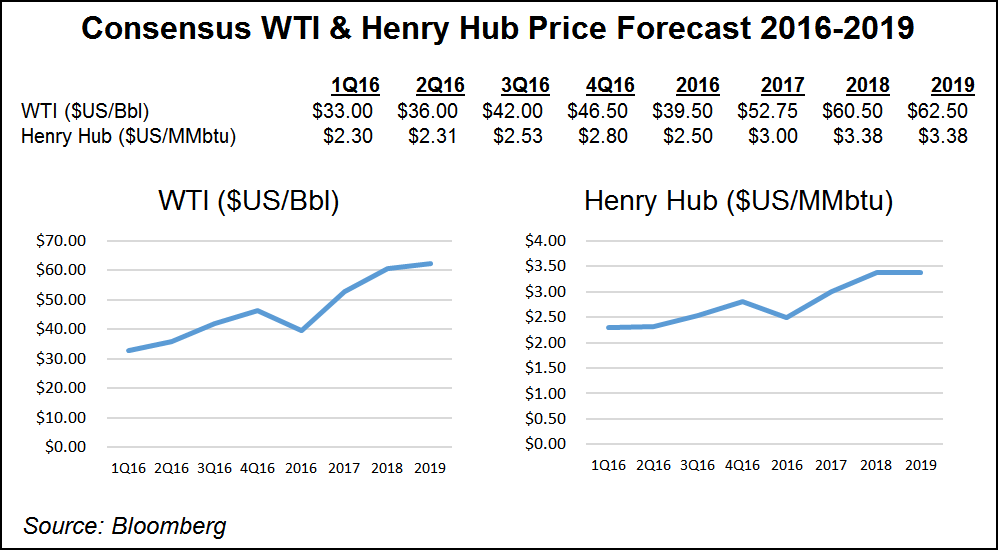 Thirty-dollar oil and $2 natural gas just don’t work, but some plays can hack it as low as $45 on the oil side. Hager is not as bullish for gas prices.

“…[W]e think we will see higher [natural gas] prices than we’re currently seeing…” But he added that Devon’s current natural gas inventory, which does not include anything in the Marcellus or Utica shales, likely won’t be economic for a while. “We are not active in the Marcellus or the Utica, and I think you can probably make economic opportunities [there], especially once all the pipeline infrastructure gets in there…”

Scratch the natural gas window of the Eagle Ford Shale, too, at least for now.

“We have a large gas position in the Eagle Ford,” said Pioneer Natural Resources Co. CEO Scott Sheffield. “We’ve only drilled a few [Eagle Ford natural gas] wells in the last five years. We need $5 gas for the Eagle Ford on the dry gas. I’m a firm believer in $3 gas long term.” There are too many high-producing wells in the Marcellus and Utica to allow gas prices to rise to an economic level for Eagle Ford dry gas, he said.

What remains to be seen, Sheffield said, is what sort of global market U.S. liquefied natural gas (LNG) can look forward to. Will Russia’s Gazprom undercut the U.S. on price and keep U.S. LNG out of Europe, he wondered. “Gas has got a tough future.”

On the oil side of the U.S. energy commodity ledger, Sheffield said that given the state of the industry, domestic shale oil production will not grow with prices in the $40-45 range. “It won’t grow at 50 dollars in my opinion,” he said. There’s not enough cash flow in the business to grow U.S. shale.

Right now, though, the focus is on reducing production, and that’s going to take a little while to work out, Hager said.

“It’s more like trying to turn an aircraft carrier versus a speedboat,” he said. Production declines have been slow to set in following drilling declines, in particular due to efficiency gains.

“Rig count has become kind of an obsolete measure because you’re getting greater efficiency out of the rigs and you’re getting greater efficiency out of each well that is drilled,” Hager said. “Now I think we’re starting to see the decline here. I’m not going to give you an absolute number, but I believe that you’re going to continue to see that decline pick up as we progress through 2016. I’m not particularly an oil price bull in 2016 at all, but I think as you move into 2017, there’s every likelihood that we can get ourselves back into balance, work through that drilled but uncompleted inventory as well as the actual oil inventory and then we start to see a turnaround.”

Consolidation of assets and companies is coming, but not right away, Sheffield said. Balance sheets are too lean and prices still too low. “What I tell our shareholders is once price gets up to $45-50, when it does, that they’ll start seeing assets being sold a lot…” Prices in the $25-30 range create fears that they could go lower still. “…[Y]ou need to get back up to $45-50, and I think you’ll see a lot of activity.”