Continuing an upward climb, operators in Ohio’s Marcellus and Utica shales produced more than 88 Bcf of natural gas and 2.4 million bbl of oil last quarter, surpassing in three months what they churned out in all of 2012, state regulators said Monday. 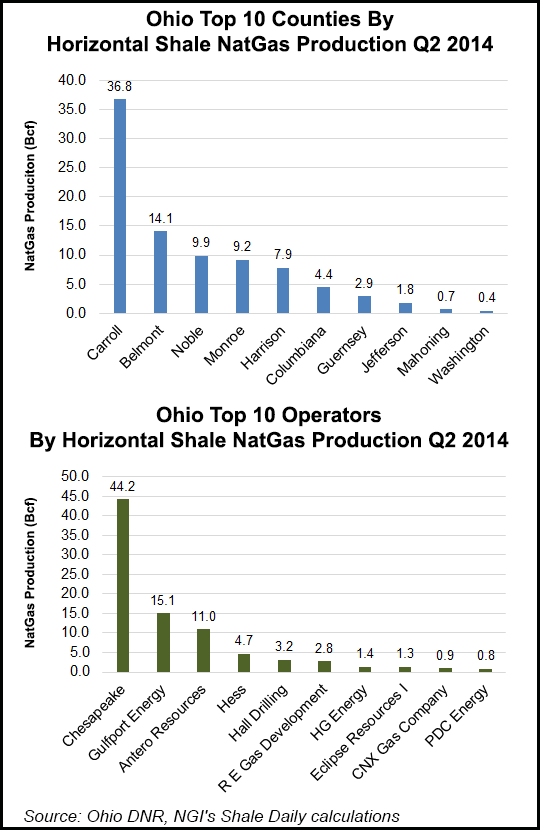 That mark is no surprise, though. Since the Ohio Department of Natural Resources (ODNR) began reporting quarterly production last December as part of an amendment to the state’s biennial budget signed in June 2013 (see Shale Daily, Dec. 2, 2013), production has been steadily climbing.

ODNR said 504 Marcellus and Utica wells reported production in the second quarter, up from 418 wells that produced 67 Bcf of natural gas and 1.9 million bbl of oil in 1Q2014 (see Shale Daily, July 2). Another 58 wells were awaiting pipeline connections, according to the agency’s report.

An overwhelming majority of the producing wells were in the Utica Shale, where operators have drilled 1,059 horizontal wells to date and permitted 1,474. That’s compared to just 44 permits that have been issued in the Marcellus Shale, where 27 horizontal wells have been drilled. Ohio law does not require the separate reporting of natural gas liquids, which are included in the report’s gas totals.

Last year, combined unconventional and conventional natural gas production set a record in the state at 171 Bcf, driven mainly by high-volume horizontal fracturing (fracking) in the Utica Shale, which accounted almost entirely for 100 Bcf of that total (see Shale Daily, July 8). In July, when the annual production figures were released, Chief of ODNR’s Division of Oil and Gas Resources Management Richard Simmers said the state is “seeing a fairly significant increase in oil production.”

Also on Monday, the U.S. Energy Information Administration predicted that natural gas production in the Utica Shale would reach nearly 1.5 Bcf/d by October in its Drilling Productivity report. That’s up from a 1 Bcf/d estimate it released last month when it added the formation to the report because of the rapid growth in oil and gas volumes (see Shale Daily, Aug. 1).