Nearly 100 shale gas-driven chemical industry projects in the United States — worth about $71.7 billion — will generate $20 billion in federal, state and local tax revenue by 2020, according to an analysis released Monday by the American Chemistry Council. 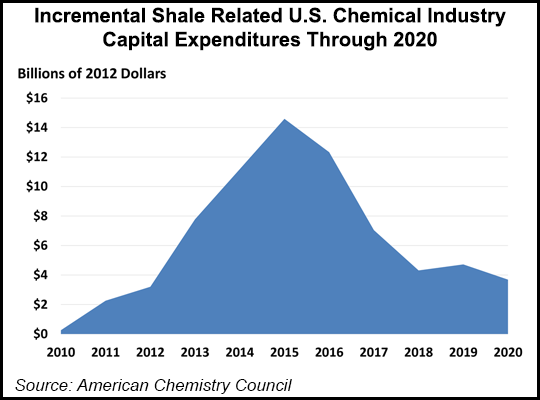 “Shale Gas, Competitiveness, and New U.S. Chemical Industry Investment — An Analysis of Announced Projects,” examined 97 announced chemical and plastics projects; it is the third in a series of ACC reports. The study found that by 2020, projects announced prior to the end of March can lead to the creation of 46,000 chemical industry jobs, another 264,000 jobs in supplier industries and 226,000 ‘payroll induced’ jobs in communities where workers spend their wages, generating $20 billion in federal, state and local tax revenue.

“Nearly 1.2 million additional, temporary jobs will be created during the capital investment phase that occurs between 2010 and 2020,” ACC said. “Government policies will strongly influence whether the U.S. is able to realize the shale gas opportunity.

“Abundant supplies of shale gas have transformed America’s chemical industry from the world’s high-cost producer five years ago to among the world’s lowest-cost producers today. As a result, the United States enjoys a decisive competitive advantage in the cost of producing basic petrochemicals.”

Dozens of chemical industry companies have announced plans to expand U.S.-based production capacity, and many of the projects target export markets for chemistry and plastics products. “The United States has become a magnet for chemical industry investment, a testament to the favorable environment created by America’s shale gas as well as a vote of confidence in a bright natural gas outlook for decades to come,” said ACC CEO Cal Dooley. “What’s especially exciting is that half of the announced investments are from firms based outside the U.S., which means our country is poised to capture market share from the rest of the world.”

ACC said a number of actions by government are necessary to nurture the shale gas revolution and its positive impact on the chemicals and plastics industries. These include measures to ensure:

The report makes barely a mention of liquefied natural gas (LNG), except in passing, and does not discuss the prospect of export of liquefied domestic gas from the United States. Last week the U.S. Department of Energy (DOE) granted its second approval for export of U.S. LNG to non-free trade agreement nations (see Shale Daily, May 20). Some in the chemical industry, most notably The Dow Chemical Co., have argued against exporting LNG, saying the benefits of shale gas would be greater if it is kept at home (see Shale Daily, March 12).

“Right now, the chemistry industry has the confidence needed to drive new U.S. investment,” the report said. “Policymakers can help ensure that confidence continues for decades to come.”

The first report in the ACC series on shale gas was released in March 2011 and examined the economic impact of increased petrochemicals production based on a hypothetical 25% increase in ethane supply. The second report, released in May 2012, considered the impact of lower natural gas prices and renewed competitiveness on a broader segment of the U.S. manufacturing base. It looked at the supply response in eight key industries: paper, chemicals, plastic and rubber products, glass, iron and steel, aluminum, foundries and fabricated metal products.