The U.S. Energy Information Administration (EIA) released a report showing that from 2012-2019, underground natural gas storage capacity in the Lower 48 has remained relatively unchanged in both design capacity and demonstrated peak capacity. 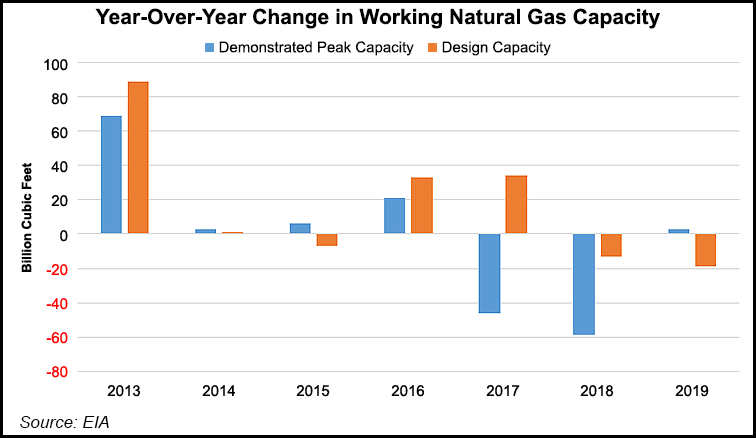 Design capacity — the engineering estimate based on the physical characteristics of the reservoir, installed equipment and operating procedures on the site — declined 0.4% in 2019. The EIA measures design capacity from calculations using the total of the working gas capacity for all active facilities in the Lower 48 as of November 2019.

During 2019, design capacity decreased by 19 Bcf in the Lower 48, though most of the decline occurred in the Mountain region. The region experienced a working design capacity decrease of 15 Bcf, or slightly more than 3% of the regional total. In 2018, following Spire Storage West’s acquisition of Ryckman Creek, now Belle Butte, and the company’s storage project in Wyoming, Spire reduced field capacity by 16 Bcf.

Elsewhere, the Pacific and East regions were the primary drivers of increased design capacity.

Over in the East, in 2019 the Cranberry Pipeline Corp. brought the Heizer A-1/Big Lime field back online. This increased working capacity in the natural gas-producing region of West Virginia by 2.7 Bcf.

In 2019, demonstrated peak capacity remained relatively flat, increasing year/year by only 3 Bcf, or 0.1%. Since November 2016, the EIA reports that this was the first time that this metric posted an annual increase.

In 2019, dozens of natural gas storage fields in the Lower 48 reported new demonstrated peaks as working gas levels rose above the five-year average for the first time since 2017.

Consumption, existing infrastructure, geography, geology, production and several other factors may impact storage capacity in any given location, according to EIA. In 2019, the increase in demonstrated peak capacity was caused by rising storage levels, and high natural gas production.

Inventories remain well above historical levels so far in 2020 as well. As of May 22, total working gas in storage stood at 2,612 Bcf, 778 Bcf above year-ago levels and 423 Bcf above the five-year average, according to EIA.