Forty-six major global oil and natural gas projects, which combined represent more than $200 billion in deferred capital spend, have been shelved in part because of the decline in oil prices, according to an analysis by Wood Mackenzie Ltd. 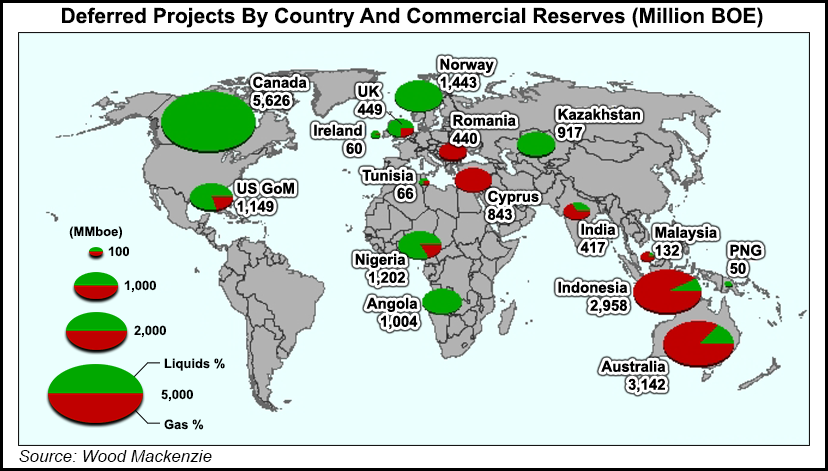 “We estimate 20 billion boe of reserves has been pushed back from a diverse range of onshore, shallow-water and deepwater projects,” analysts said. The group of 46 has a “significant number” that were “struggling to achieve meaningful progression at $100/bbl. With prices falling to half that, management has been incentivized to intervene and reset priorities, with planners and engineers asked to step back and reconsider the most cost-effective path to commerciality.”

More than half of the commercial reserves now delayed for development are deepwater projects, with almost 30% in Canadian oilsands. The grouping is 60%-plus oil/condensate.

For example, the BP plc-led Mad Dog Phase II in the Gulf of Mexico was put back on the shelf earlier this year (see Daily GPI, Feb. 3). Mad Dog and other global projects, such as the Browse floating liquefied natural gas project in Australia “face numerous above-ground, economic and technical challenges. Lower oil prices have exacerbated these issues and forced operators to delay taking FID, alongside overwhelming corporate pressure to free-up capital and reduce future spend.”

Most of the delayed FIDs now are targeting startups for between 2019 and 2023. However, if international oil companies “continue to focus on cutting future capital commitments — to the detriment of future production growth — then these dates will be pushed back further,” analysts said. “Reducing project breakevens and boosting returns will also play a crucial role.”

Delays over the last six months have come from two major factors. To improve the balance sheet, operators have deferred discretionary spend, particularly for exploration and pre-development projects. Also, more time is being allotted for some projects to enhance production capacity, cost optimization and improve overall economics.

“By resource theme, deepwater and Canadian oilsands dominate project deferrals,” according to Wood Mackenzie. “However, there the similarities end, as the outlook for each sector is very different.”

For instance, in the deepwater, BP, Royal Dutch Shell plc and other operators “are keen to defer FID if they can benefit from deflation in drilling and subsea costs, alongside a more robust approach to project management. Nonetheless, for all of the majors deepwater remains a key strategic growth theme.”

By comparison, the outlook in the short term for investments in Canada’s oilsands “is bleak,” analysts said.

By the end of this year, “we may be able to count the number of major upstream projects that made FID during 2015 on one hand,” analysts said. “The dramatic fall in oil prices in 2014 and subsequent deconstruction of 2015 company capital budgets has by mid-year already resulted in over 45 major project FID deferrals. Together, these create a substantial hole in the industry’s investment pipeline.”

Most vulnerable are technically challenging projects with significant upfront costs and/or low returns.

“The upstream industry is winding back its investment in big pre-FID developments as fast as it can,” analysts said. “This is partly because it is one of the quickest ways to free up capital in response to low oil prices, although this process was already under way in the shift to value versus volume.”

More progress is needed for many of the delayed projects to gain traction, according to Wood Mackenzie analysts.

“We estimate that half of the new greenfield developments still produce sub-15% development internal rates of return, or IRRs…below most companies’ economic hurdle rate. This is equivalent to $20 billion of spend out to 2020, of which nearly half is invested in projects with returns below 12%.”

The number of delayed FIDs is rising. Last December, Rystad Energy estimated that based on falling oil prices, about $150 billion worth of upstream projects scheduled for FIDs would be delayed (see Daily GPI, Dec. 5, 2014).