Final investment decisions (FID) for $150 billion worth of projects, including in Canada, Alaska and the Gulf of Mexico, and liquefied natural gas (LNG) export proposals in North America, may be deferred or canceled next year as oil prices continue to fall, consulting firm Rystad Energy said Friday. 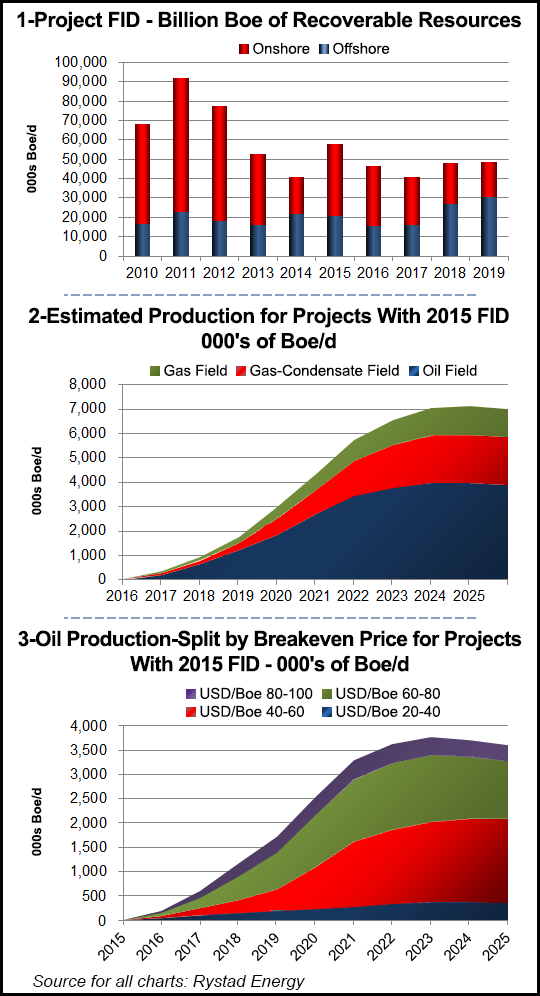 The Norwegian firm said operators are planning to make FIDs on a total of 800 projects valued at about $500 billion, which would bring in a combined total of almost 60 billion boe. However, plunging oil prices could force the cancellation of at least one-third of the projects, and possibly more.

Rystad, an independent oil and gas consulting firm, said analysts are forecasting oil to average $82.50/bbl in 2015. At that price, $150 billion worth of projects would be canceled.

At $70/bbl, half of the overall volumes would be at risk, Rystad head of analysis Per Magnum Nysveen told NGI on Friday. Brent was trading below $69 on Friday morning and was set to close below $70 for the first time in four years.

Rystad’s data was drawn using its proprietary UCube, an upstream database that provides a detailed field-by-field analysis of all the oil and gas projects that are ready for FID next year, and the possible impact from reduced oil prices on those decisions, Nysveen said. UCube includes 65,000 global oil/gas fields, portfolios of 3,200 operators, and it covers the period of 1900 to 2100.

Higher oil prices won’t impact every oil-rich project that’s contemplated. However, they could scuttle a lot of proposals in North America, including oilsands projects in Alberta, Alaska onshore and offshore endeavors, deepwater exploration and development in the GOM and LNG projects, Nysveen said.

“The geographic distribution of the delays includes all regions with new growth potential for costly oil,” which also includes Brazil, West Africa, North Sea and LNG projects in Australia and West Africa, he said. “The highest-cost operations are Arctic Russia/Canada/Alaska, Alberta oilsands, and a large number of relatively small and/or complicated deepwater projects.”

Nysveen predicted that U.S. shale oil also would be impacted by low prices, but only in marginal/emerging plays and those without infrastructure.

The “largest plays,” including the Permian Basin, Niobrara formation and Bakken and Eagle Ford shales “could be quite resilient” at West Texas Intermediate (WTI) $60.

Most companies, said Nysveen, “will survive by cutting the spending on drilling,” but there’s a chance of bankruptcies. If that were to occur, life goes on. “Other companies will take over the land and continue the drilling.”

Credit Suisse analyst Ed Westlake and his team have lowered their earnings expectations for U.S. majors and independents across the sector.

“Those companies with good balance sheets entering this weaker period and with good underlying rocks will likely continue to drill,” he said. “Those with fringe acreage or with more challenged balance sheets will need to make larger adjustments.”

The equity markets, he said, “have been grappling with the earnings and net asset value impacts of lower oil prices since July, and notably since the beginning of September. However, with no OPEC cuts, there is substantial downside to near-term earnings per share.”

Credit Suisse’s analysis suggests that $80 Brent ($75 WTI) “could prove a new equilibrium point, allowing for some growth in domestic production and some room for growth outside the U.S. However, we would overshoot to the downside in the short term to set up the appropriate activity reduction that is required. We are entering a global experiment in how lower prices will affect supply (notably shale).”

The “core of the core” shale still generates good economic returns in Credit Suisse’s price deck, but the decline in more conventional production and the “fringes” of each shale play could slow production growth.

“The impacts on available funding will not solely be limited to the reduction in industry cash flows,” said Westlake. “There has been sizeable increase in the borrowing base over the last several years. Offsetting the reduction in activity, management teams will likely high grade their drilling inventory to their best prospects; technology is improving; and there will be a reduction in service costs.”

A few analysts in recent days said the floor for crude oil could be as low as $50, which would spread the pain among the exploration and production (E&P) sector and oilfield services. If that were to happen, the price likely wouldn’t remain at that level for long, said NGI‘s Patrick Rau, director of strategy and research.

“U.S. shale, Canadian oilsands and deepwater production represent the marginal barrel of production,” Rau said. “Long-term, we are going to need every barrel of that to meet rising demand. The marginal cost of those three sources are probably more like $75/bbl on average, so WTI prices would have to rebound to that in time.

“Shorter term, it will lead to consolidation in the industry, particularly for the unconventional oil companies that have high levels of debt. Remember, a key financing tool E&P companies have is their credit facilities (aka revolvers). The maximum amount they are able to borrow under those facilities is based on commodity prices. My understanding is that the credit agencies are basing their crude oil outlook on $75 oil right now, but sustained lower prices will cause the borrowing bases on those revolvers to decline, which puts operators that are suffering from liquidity constraints in even more of a bind.”

Producers also may be more bullish on natural gas in 2015, Rau said. “Those companies that haven’t hedged as much and/or that have more debt on their balance sheet are going to have to produce something to keep the cash flowing, so that may be driving the relative bullishness of gas to oil as well. For these companies that absolutely need to produce to meet their cash needs, the opportunity cost of producing more gas now may be lower for them if they believe crude prices will rebound and rise faster than natural gas in relatively short order, as in, ‘let’s shut in more oil now, produce more gas, and wait for WTI prices to rebound back to say $80/bbl a year from now.’

“History also shows that if December proves to be warmer than normal, then the rest of the winter gas strip tends to suffer. These next few weeks are going to be critical, especially since it’s also the time when most companies will be determining their 2015 capital expenditure budgets.”