By 2025, nearly one in 10 medium- and heavy-duty trucks sold globally will run on natural gas, according to a report released Thursday by Frost & Sullivan (F&S). 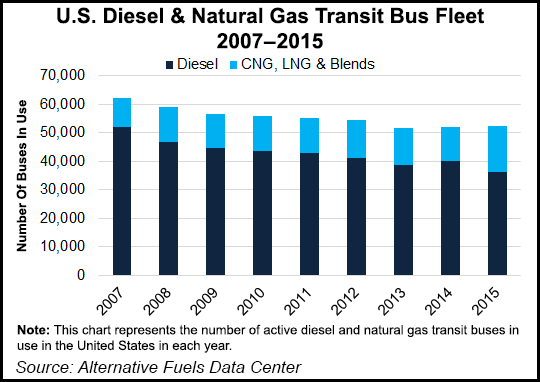 That includes both compressed natural gas (CNG) and liquefied natural gas (LNG) powered trucks, according to the report. China, Europe and North America will account for more than 80% of global natural gas vehicle (NGV) trucks sales in 2025, and Asia will benefit from what F&S authors called an oversupply of LNG by that time period.

There is a push for alternate truck powertrains that F&S attributes to energy price volatility, global LNG trade, tighter emission norms, and an “emergence of noise-pollution-free zones.”

“The NGV market is witnessing the first wave of consolidation across integrators and tank manufacturers. Japan, Russia, India and Indonesia are emerging as the next big adopters of NGVs.”

Sudhakar said that LNG may “dethrone” CNG by 2025 as having the greatest penetration of the long-haul trucking sector, although CNG currently holds a higher percentage.

“Cummins, FPT and Weichai [China engine-maker associated with Westport] will be key Tier 1 engine suppliers shaping the future of the NG market across developed markets, with an extensive NGV engine portfolio for a wide variety of duty cycle applications,” he said.

While the F&S report forecasts double-digit growth rates in the NGV truck penetration, it also cautioned that commercial fleet owners may be ready to hit the pause button, given higher acquisition costs for vehicles, today’s relatively low oil prices, and the lack of government subsidies anticipated. Eventually, however, the report noted that renewed encouragement would come to fleet owners to buy NGV trucks through technological advances and improved scalability to help OEMs lower the initial vehicle costs.

A leading U.S.-based NGV fueling station developer, Love’s Trillium CNG, announced this month that it is developing new stations in Florida and Colorado.

In Florida, Love’s Trillium signed a deal to develop two CNG stations for Miami-Dade County. The county-awarded contract calls for designing, building and maintaining the CNG fueling facilities, along with upgrading maintenance facilities and acquiring up to 300 buses for the county’s public transportation system. Each of the stations will service up to 250 Miami-Dade buses. Trillium said it contracted with New Flyer of America Inc., North America’s largest bus and motorcoach manufacturer/distributor, to provide the first 300 buses to be delivered this year and next.

The stations to be developed by Love’s Trillium will be the first public CNG fueling locations in the county, according to the Alternative Fuels Data Center. There will be separate light and heavy duty vehicle fueling islands at each facility, the first of which will be open later this year.

In Colorado, Love’s Trillium has inked a deal with Gunnison County and the local Rural Transportation Authority to develop a station that will fill a gap in statewide CNG fueling in the 300-mile stretch between Grand Junction and Pueblo. Trillium will design, build, operate and maintain the CNG station, which is scheduled to open this summer.

Love’s Trillium’s Bill Cashmareck said the station is another project in which “the transit sector, a municipal fleet and over-the-road professional truck drivers were able to come together and move toward alternative fueling options.”

Clean Energy boasts that Redeem offers a NOx emissions level of .02g/bhp-hr, which the California Air Resources Board has defined as “zero emissions level” and equivalent to a 100% battery truck using electricity from a modern combined cycle natural gas power plant. Cummins Westport plans to begin producing a 12-Liter version of the engine in 2018.

“Thanks to technology advancements and the use of RNG, the transportation industry has come a long way in reducing the amount of NOx and GHGs that are emitted,” said Clean Energy CEO Andrew Littlefair.

Sold directly to Geneva Rock by the manufacturer, the trucks are part of an $8 million CNG fleet project by the company that includes an American Natural Gas Inc. Energy Systems time-fill fueling station.