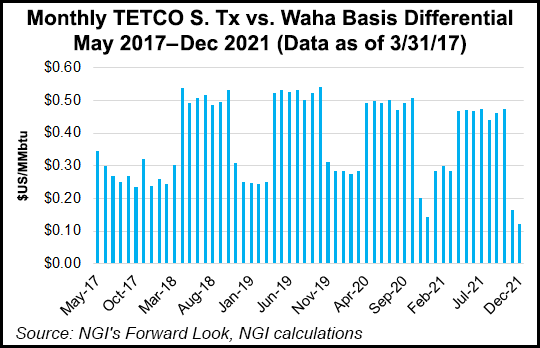 The 42-inch diameter system would have 1.85 Bcf/d of capacity from the greater Permian Basin to the Texas Gulf Coast, “a rapidly emerging premium destination for natural gas supply in the U.S.,” the company said.

NAmerico is developing the system in partnership with Cresta Energy Fund I LP, a newly formed investment fund focused on energy infrastructure. “The system will be an efficient link connecting phenomenal growth in the Permian with equally impressive market growth in the Texas Gulf Coast.” the company said.

“We have been actively engaged in discussions with prospective shippers and stakeholders for several months to identify and design an ideal system to meet the timing and service specifics needed to allow Permian production activity to continue its impressive growth” said Jeff Welch, managing partner of NAmerico Partners LP.

Pecos Trail is slated to be operational in 2019, with anticipated deliveries into intrastate pipelines in Texas, in addition to Spectra Energy’s Valley Crossing Pipeline, The NET Mexico Header, and the Cheniere Energy Corpus Christi LNG Header system, subject to shipper commitments.

NAmerico said it expects that, based on current drilling activity, overall Permian production could more than quadruple by the middle of the next decade, with associated gas production reaching as much as 20 Bcf/d, far surpassing the region’s available takeaway options.

Included in that production gain is associated natural gas. NAmerico hired RBN Energy to analyze the need for more takeaway capacity from the Permian. Estimates are that with “moderate growth” there will be 8-10 Bcf/d of natural gas production coming out of the Permian by the end of this decade, Welch told NGI. “In that scenario new capacity is needed to provide flow assurance to Permian producers”

And there’s demand on the market end, too.

“The evolution of the South Texas market with export initiatives and industrial load growth has significantly changed the dynamics of that market. In and around the Corpus Christi area we’re seeing tremendous demand for incremental gas supply,” he said.

“…[T]he upstream sector in pursuit of oil exploitation does not want to be constrained because of natural gas takeaway. But the perfect marriage of that is a very significantly growing consumption market in and around Corpus Christi, including Agua Dulce…Some of that is LNG exports, some of that is Mexico exports and some of that is new industrial load.”

Commenting on the KMI project, East Daley Capital analyst Justin Carlson wrote in a recent note that “On the surface the project appears viable given the booming growth of the Permian, the recent drop in gas production in the Eagle Ford, and the need for more gas at Agua Dulce to feed Spectra’s Valley Crossing Pipeline’s exports to Mexico by 2019. However, looking deeper into the production fundamentals throws some cold water on the project.”

Gas production from the Permian is also growing, but it is “tempered” by lower natural gas IP rates compared to those in the Eagle Ford, Carlson said, adding that the recently finished Trans-Pecos Pipeline and Comanche Trail Pipeline “will take significant volumes from the Permian over the next few years.

“Based on these current production and demand fundamentals we see a large-scale greenfield pipeline would be a tough sell to producers or marketers,” Carlson said.

However, KMI has a more bullish view. “Our fundamental analysis shows that Permian production is outgrowing existing takeaway pipeline capacity, and the Texas Gulf Coast is the logical destination for that production,” the company said in an email to NGI. “The purpose of the open season is to confirm our analysis, and at this point, we’re receiving strong indications of interest.”

Welch said he’s confident in the RBN analysis projecting robust gas production from the Permian. Pipelines serving Mexico are largely dependent upon demand from power generators there, and some of that demand won’t arrive until the early to middle part of the next decade, Welch said. Permian producers need more flow assurance than these projects can provide, he said.

Enterprise Products Partners LP also has talked about constructing a natural gas pipeline from the Permian to the Gulf Coast. “At this point it is under consideration but we have not made a final decision on moving forward with the project,” spokesman Rick Rainey told NGI.